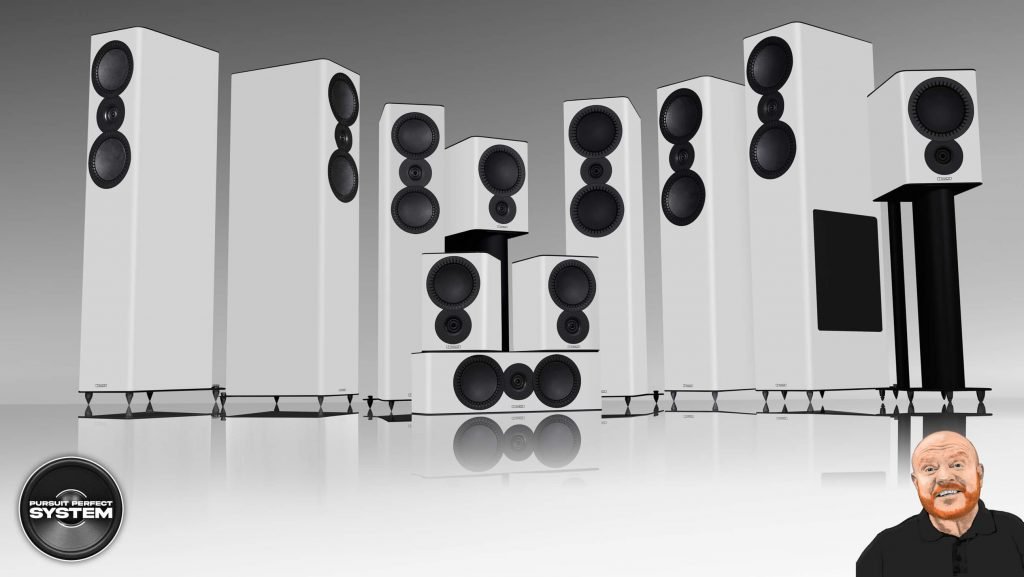 Since its formation in 1977, British speaker manufacturer Mission has been famed for delivering compelling musicality at affordable prices. The company’s QX Series is a perfect example – launching in 2017, it delivered an impressive step-up from the company’s successful entry-level LX Series, earning many accolades including coveted ‘Best Speaker’ Awards from the likes of What Hi-Fi? and AVForums. In terms of both material and sonic value for money, the QX Series hit the sweet spot for those seeking something extra over the best ‘budget’ speaker ranges of the day.

Four years on and Mission has re-engineered the QX Series inside and out, applying painstaking enhancements to once again deliver a benchmark ‘step-up’ loudspeaker range, sitting above the entry-level LX MkII Series which launched in 2020. The new QX MkII Series spans six passive models – two standmount speakers, three floorstanders and a centre speaker for home cinema systems. A new active subwoofer – the QX-12SUB MkII – has also been developed to complement the range. 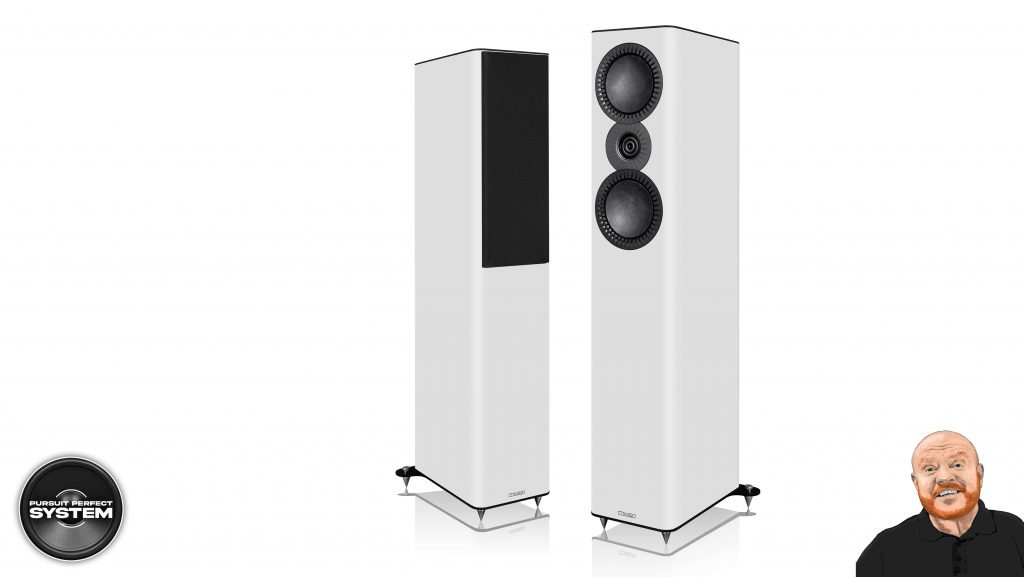 The new MkII models are outwardly similar to the original QX Series speakers – the cabinets are the same size, with similar detailing including curved cabinet corners and smoothly dished drive units with ‘comb-tooth’ surrounds. But there are external enhancements, not least the new, luxuriously tactile matt black and matt white finish options. For those who prefer traditional wood finishes, a walnut veneer is also available.

Redesigned aluminium plates are clamped to the top and bottom of the cabinets, an attractive detail that adds mass and enhances rigidity, thereby reducing cabinet resonance. The arc-shaped cabinet corners are also more than merely stylish; they smooth diffraction from the drive units and yield better power distribution into the room. In terms of appearance, the QX MkII Series evolves the QX design in a way that is distinctly ‘Mission’ – a smart, modern aesthetic, driven by cutting-edge acoustic engineering. 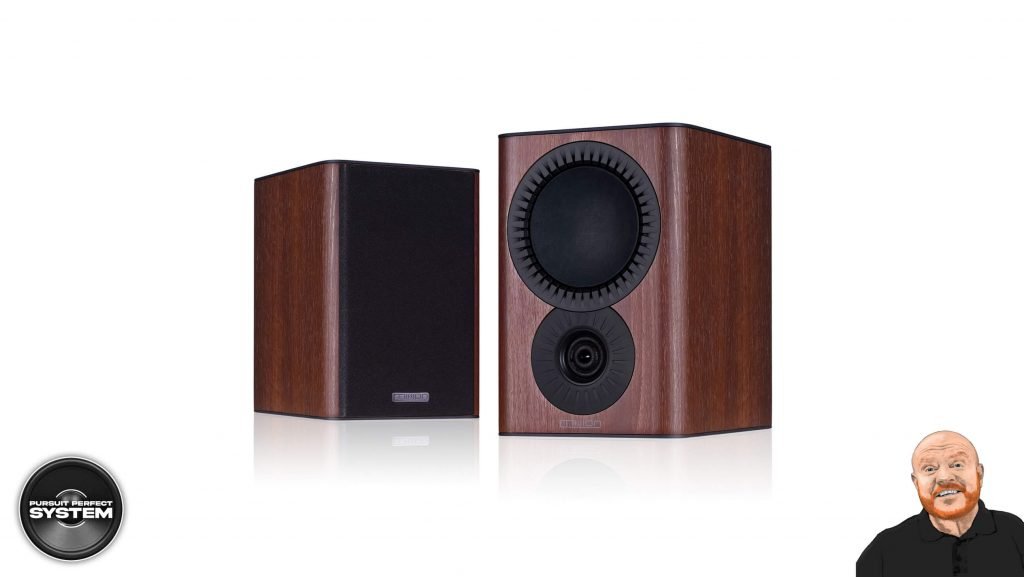 A tweeter worth tweeting about

The vast majority of hi-fi loudspeakers on the market utilise a tweeter with a domed diaphragm. While these can reach a high level of performance if made to a high standard, there is an inherent flaw in their design – the voice coil, the element that imparts musical energy to the diaphragm, is connected only to the outer circumference of the dome. This means that the dome’s centre is not connected to the drive system and therefore is not under direct control.

The Mission QX MkII Ring Dome treble unit addresses this issue. Unlike traditional dome tweeters, the centre of the textile dome is fixed, and the voice coil is attached partway down the dome. This forms the dome into two rings with the voice coil in the centre, enabling it to drive the dome more accurately and efficiently.

The result is lower distortion and superior performance at frequencies well in excess of 20kHz. Transient performance is dramatically improved, as is musical detailing, particularly of instrument overtones and harmonics, enabling the full character of instruments and voices to be conveyed with outstanding clarity.
Rearward radiation from the QX MkII Ring Dome unit vents into an enclosed chamber filled with damping material, acting like a dedicated ‘cabinet’ for the high-frequency driver. Resonances are absorbed and the back pressure on the dome is greatly reduced, allowing the unit to deliver accurate musical detail right down into the midrange. 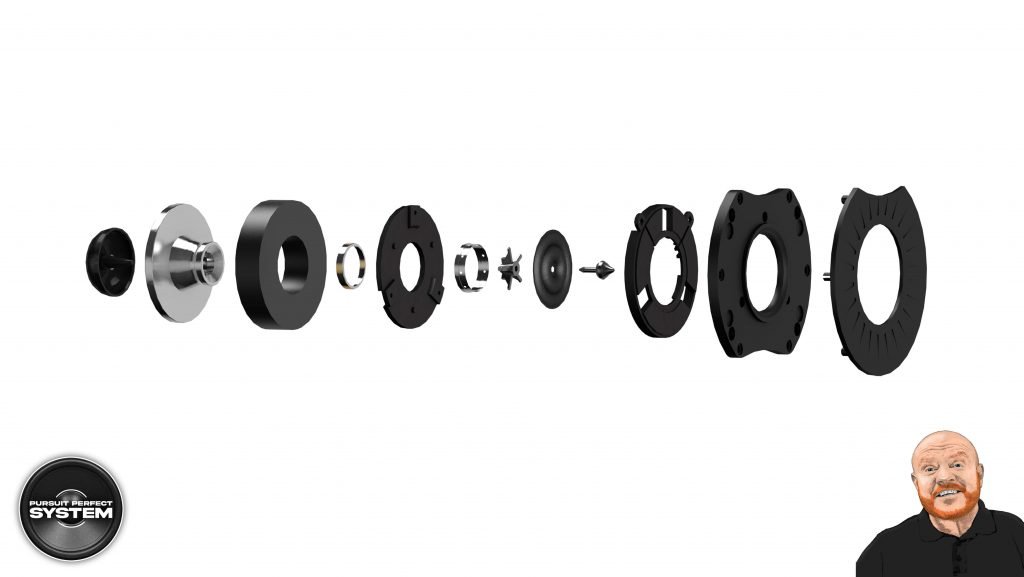 The QX MkII Series features the latest version of Mission’s DiaDrive bass/midrange drive unit, where the usual cone and dust cap arrangement is replaced by a seamless curvilinear diaphragm. This is directly driven by a secondary sub-cone connected to the voice coil, improving the efficiency of drive and providing superior control of the smoothly dished diaphragm

The QX fibre-composite diaphragm has been re-engineered for the MkII range, now incorporating long acrylic fibres to achieve improved stiffness with superior self-damping, further enhancing the impact and accuracy of bass and midrange frequencies. The unit is now vented to remove trapped air behind the diaphragm, reducing resonance and allowing a clearer midrange performance to beyond 3kHz. A high-strength ferrite magnet ensures that the magnetic field is directed precisely within the area of voice coil excursion, enabling an ultra-linear performance and excellent transient response. 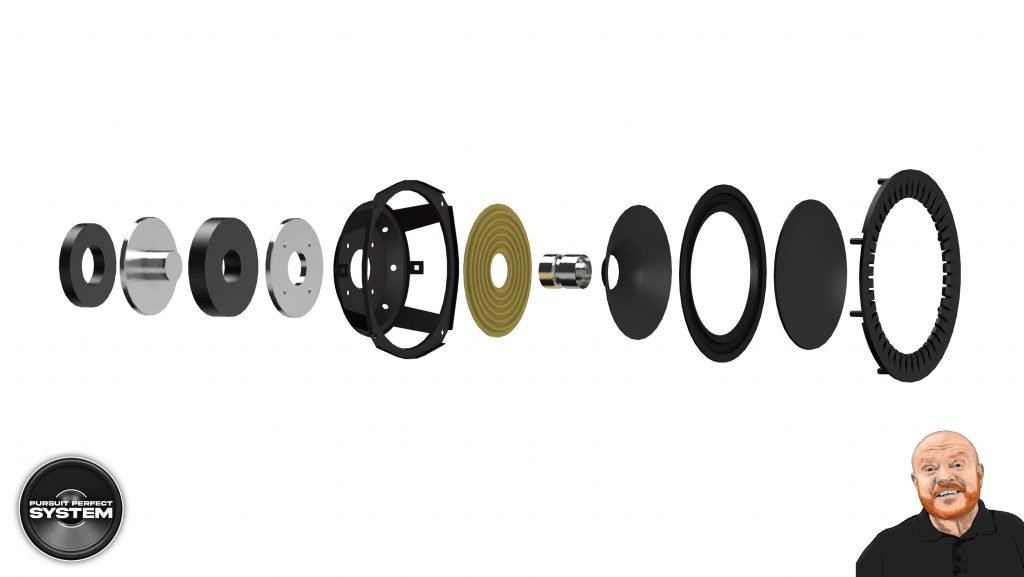 The two standmount models in the QX MkII Series feature DiaDrive units positioned according to Mission’s Inverted Driver Geometry (IDG), with the bass/mid driver sited above the treble unit rather than below to aid time-alignment – a Mission trademark since the 1980s. Placing the bass/mid driver closer to ear level with the treble unit positioned beneath helps to equalise the path lengths from the two drivers’ acoustic centres, so that the sound waves coincide at the listener’s head height.

The two-way QX-3 MkII and QX-4 MkII floorsanders extend IDG to a full D’Appolito array, siting the treble unit between a pair of DiaDrive bass/mid units – one above, one below. The largest model in the range, the QX-5 MkII, is a three-way design incorporating a dedicated 30cm bass driver positioned at the side, thus maintaining a slim cabinet front while extending bass down to 27Hz.

The original QX Series pioneered the use of ‘comb-tooth’ serrations in the driver surrounds to scatter interfering reflections from localised surfaces to the bass/mid cones. Detailed analysis has enabled further optimisation these serrations for the MkII models, minimising airflow interference and maximising the effective scattering of reflections. Tapered indentations have also been added to the treble unit’s surround, further smoothing frequency response.
Similar indentations are incorporated into the slot-shaped reflex ports exiting at the rear of the cabinets; the flair of these ports is serrated, which helps to smooth the high-pressure airflow, while the asymmetric shape breaks up the ‘chuffing’ sound that can be produced by regular circular ports. These ports augment the main drivers and contribute to the speakers’ taut, well-defined bass.
The precisely determined use of these serrations works alongside internal design elements such as strategically placed bracing and judicious use of damping material to absorb unwanted energy inside the cabinets, removing midrange coloration and improving the transient attack of bass frequencies 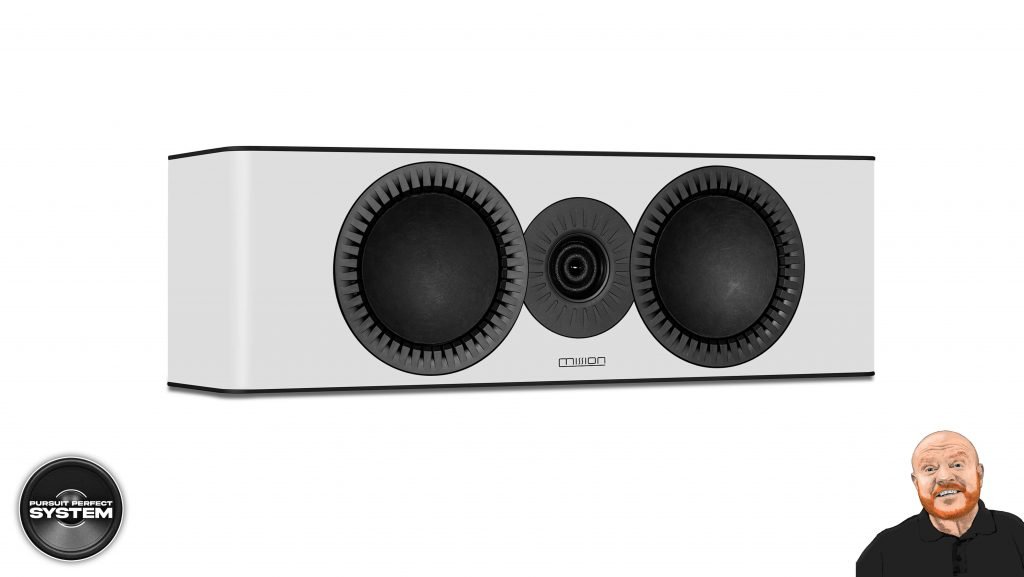 While focus is often placed on the design of a speaker’s drive units, not every manufacturer fully addresses the critical importance of the crossover network. This filters the audio signal and directs different frequencies to the correct drive unit, thus ensuring the drivers work in perfect harmony.

The best crossovers are simple in terms of signal path but sophisticated in their circuit design; Mission’s IDG configuration aids this design by ensuring the path lengths from bass/mid and treble units is partially equalised by the time the transients from each driver arrive at the listener’s ears.

Months of testing was undertaken to deliver crossover networks of the highest quality to compliment the QX Series’ driver configurations, starting with technical measurements in Mission’s state-of-the-art anechoic chamber and ending with fine tuning of each crossover component by ear, using a wide variety of musical styles and sources. The result is seamless integration between the drive units, so that the speaker behaves as a single, coherent music-making system.

All about that bass

The six passive models in the QX MkII Series are joined by a new active subwoofer – the QX-12SUB MkII. Ideally suited to increase bass depth and impact with both movies and music, the new sub incorporates a 30cm (12-inch) bass cone, formed from a special pulp fibre formulation with excellent self-damping properties. This combines with a powerful 300W Class D amplifier and a ported, rigidly braced enclosure to deliver an excellent combination of depth, speed and impact. A range of facilities include low-pass filter adjustment from 40Hz to 150Hz (@33dB), enabling the user to set the crossover frequency for seamless system integration, plus volume adjustment, a phase inversion switch and auto on/off sensing. RCA inputs are provided for stereo line-level connection, or a dedicated LFE feed. The QX-12SUB MkII comes in a choice of matt black, matt white or walnut finish, matching the rest of the QX MkII Series.
Music leads, technology follows

“Mission loudspeakers have been thrilling music lovers with powers of communication that far exceed their price points for more than 40 years,” said Peter Comeau, Mission’s Director of Acoustic Design. “I’m proud to have been involved in the design of many of these speakers since my first association with Mission in 1999. We’ve won many awards over the years, not least in recent times for the highly successful QX Series; in the four years since its launch, we’ve engaged cutting-edge scientific analysis, computer modelling and – crucially – hundreds of hours of listening tests to deliver significant improvements across the board. The QX MkII Series speakers reward the modest investment required to own a pair with a thoroughly engrossing musical experience.”

All seven models in the Mission QX MkII Series are available from September in a choice of soft-touch matt black or white, or walnut wood veneer. 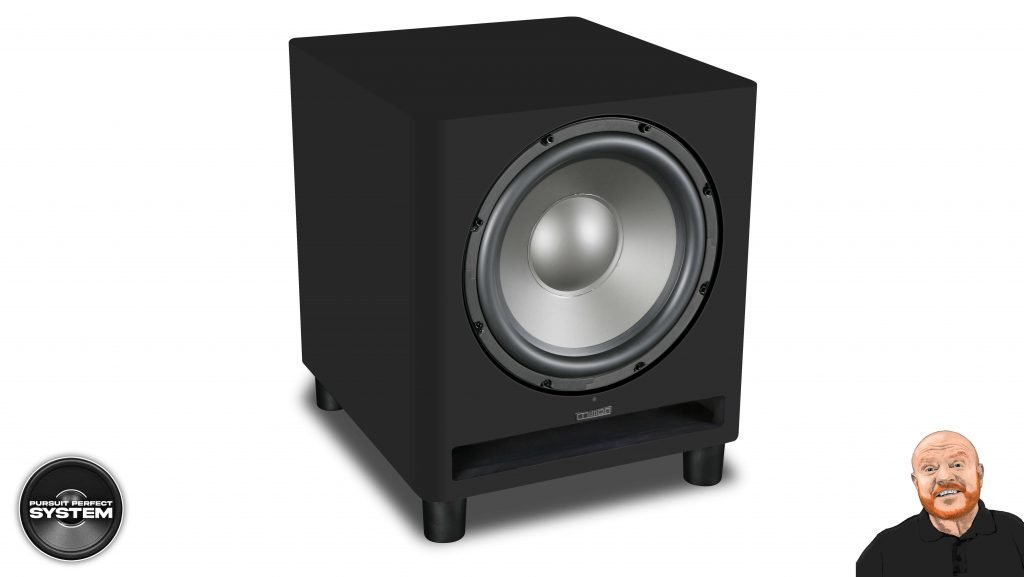